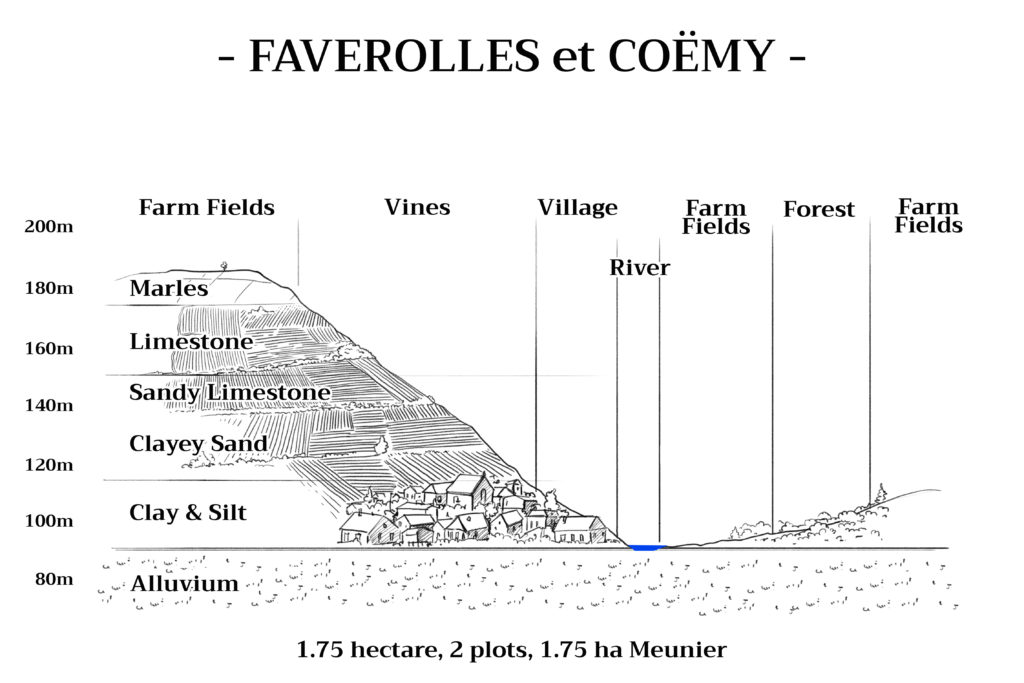 The large limestone promontory shaped by the Ardre river, which now flows a hundred meters below, juts out towards the southwest. Only its slopes located between 110m and 180m are covered with vines.

Unlike the soil sections of the Montagne de Reims, which reveal a fairly simple horizon (composed of soil and subsoil), the geological structure of the Vallée de l’Ardre is more complex.

The valley floor is composed of clays linked to colluvium carried by the river. The upper level is clayey, then sandy-clayey and, from an altitude of 150m, the slope bends towards the plateau thanks to a thick limestone slab whose deposit dates back to the middle Lutetian floor, about 45 million years ago.

This very compact fossiliferous limestone that forms a ledge is so dense that it was used to erect the foundations of Reims Cathedral. At the top, the vines reach the fields set in a crown on a plateau made up of marl and clay.

Our plots are located on this fossiliferous limestone, between the edge of the fields at the top of the hill, and the path that marks the separation between the limestone and the clay.

The Meunier, rare on this support, benefits from a great resonance specific to this compact and hard rock. It is accompanied by notes of exotic fruits originating from the slow degradation of the solid elements that the vine draws from the cracks in the limestone. We also perceive the salinity associated with the decomposition of fine elements such as marine fossils.

Facing South, South-West, our plots benefit from direct sunlight, from mid-morning until dusk. This contribution of photosynthesis makes Meunier seductive because it is rich and round, but also very fresh.

The direct sun heats the vine which will have to regulate its temperature and its hydration by means of evapotranspiration. It opens the pores under its leaves and lets the water escape. This creates a siphon effect since the vine must continue to hydrate itself by drawing water from the basement. It will find in Faverolles & Coêmy the salinity and the calcareous vibration as well as the menthol that it will offer to our wines.

We vinify a single-plot cuvée from the highest plot of our terroir, the one resting on the thickest layer of limestone. This is “Sente au Beurre”, named after the plot from which it comes.