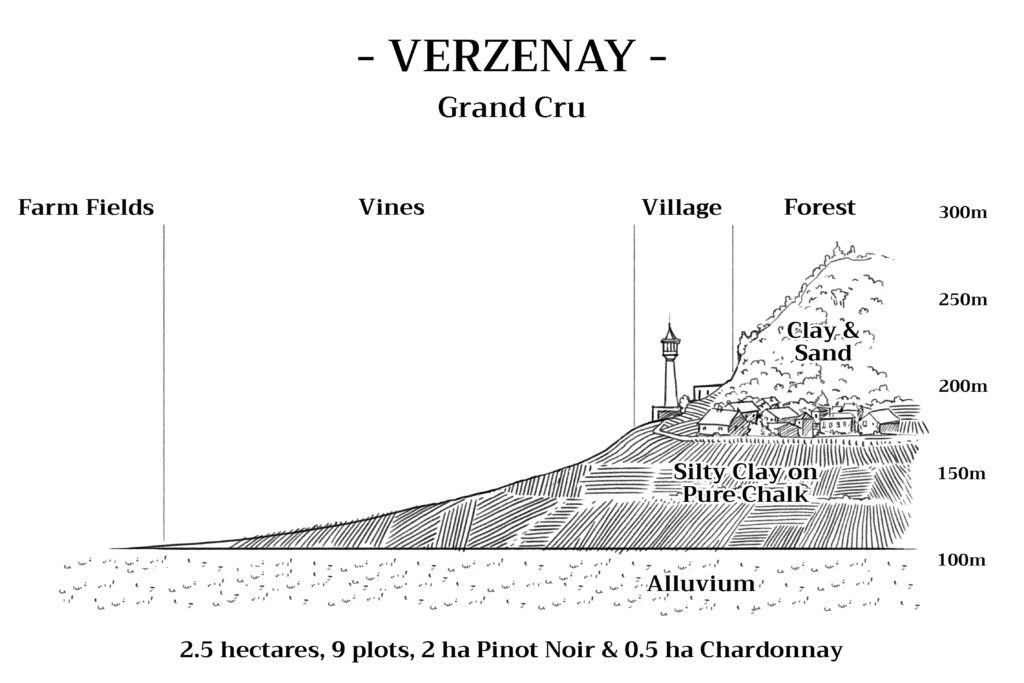 Northern exposure for the majority of Verzenay area, although the croups of the two glove fingers often offer North-East or North-West variations on each of their slopes.

The soil is quite unique in this sector since the cru presents a relatively important inflection, the most important of the area of the Mountain of Reims, with a difference in level extending over nearly 2.8km between 110 and 230m of altitude.

This slope has generated a strong erosion over the geological periods and a chalky reworking (crystallization in the form of hardened chalk), less porous in particular at the altitude of the two promontories which surround the village and carry the famous Lighthouse to the South, and the no less famous Windmill in the North.

This erosion carried the clayey silts quite far towards the plain, allowing a sort of sieving of fine elements downwards (in particular the clays). Our plots are rather located at the bottom of the slopes towards the plain, evenly distributed over the fingers. The soil, made of fine clayey colluvium and silt from erosion, touches the chalk on the tops of the fingers while it is deeper in the hollows of the valleys.

The vines benefit both from the vinous power conferred by the clays and sometimes from the freshness of the northern exposure which reinforces the bitterness and reactivity of the tannins of Pinot Noirs or sometimes from the fruity and fleshy elegance that the sun offers to plots looking south.

By working the soil, the rootlets (small roots) feed both in the last horizons of accumulation of clay minerals which will offer the fruity power and the structure specific to Pinot Noir of Verzenay, and in the hard chalk of the sub-soil from which they will draw the precision and the vibration in the aftertaste.

Due to its large surface area and its great diversity of soil, subsoils, altitude and exposure, Verzenay is a terroir that is both complex and fascinating. The distribution of our plots over the entire territory of the village allows us to have a wide range of aromas and characteristics specific to this Grand Cru village with which to play during the blends.

Marie-Noëlle vinifies the plots of Verzy & Verzenay in Champagne that can blend the grape varieties, the harvest or let the uniqueness of a Vintage express itself. They marry wonderfully with the minerality of Chardonnay de Villers-Marmery.